The 3rd FAI World Indoor Skydiving Championship – which is taking place in Lille, France – started yesterday with the registration of the teams. More than 30 countries, more than 250 competitors – a very interesting prospect is waiting for us over the next few days.

The 17th of April was the training day at the World Indoor Skydiving Championship. All the competitors were trying the wind conditions in Weembi tunnel and flying the speed checks.

If you are a real fan of Indoor Skydiving you surely have to follow this great event! To help you here are few important links:

http://www.wisc2019.com/livestream/- link for the livestream

http://results.worldskydiving.org/FrontEnd/CompetitionCollection/1027– link for the results

https://www.fai.org/ipc-lille2019- IPC page of the event on FAI web-site

@FFParachutisme– FaceBook page of the Federation of parachute sport of France

The Opening Ceremony of the 3rd World Indoor Skydiving Championship gave the official start for the competition!

Today indoor skydivers from all over the world were, at the same time, in the same place – Cultural Center of Lesquin (the small place near the city of  Lille, France) to mark the opening of the Championships.  Flag-colored t-shirts made everyone special but united at the same time. Especialy because we all are different and represent different countries, but united – because we all are doing the same thing, our "passion" makes us a unique society! 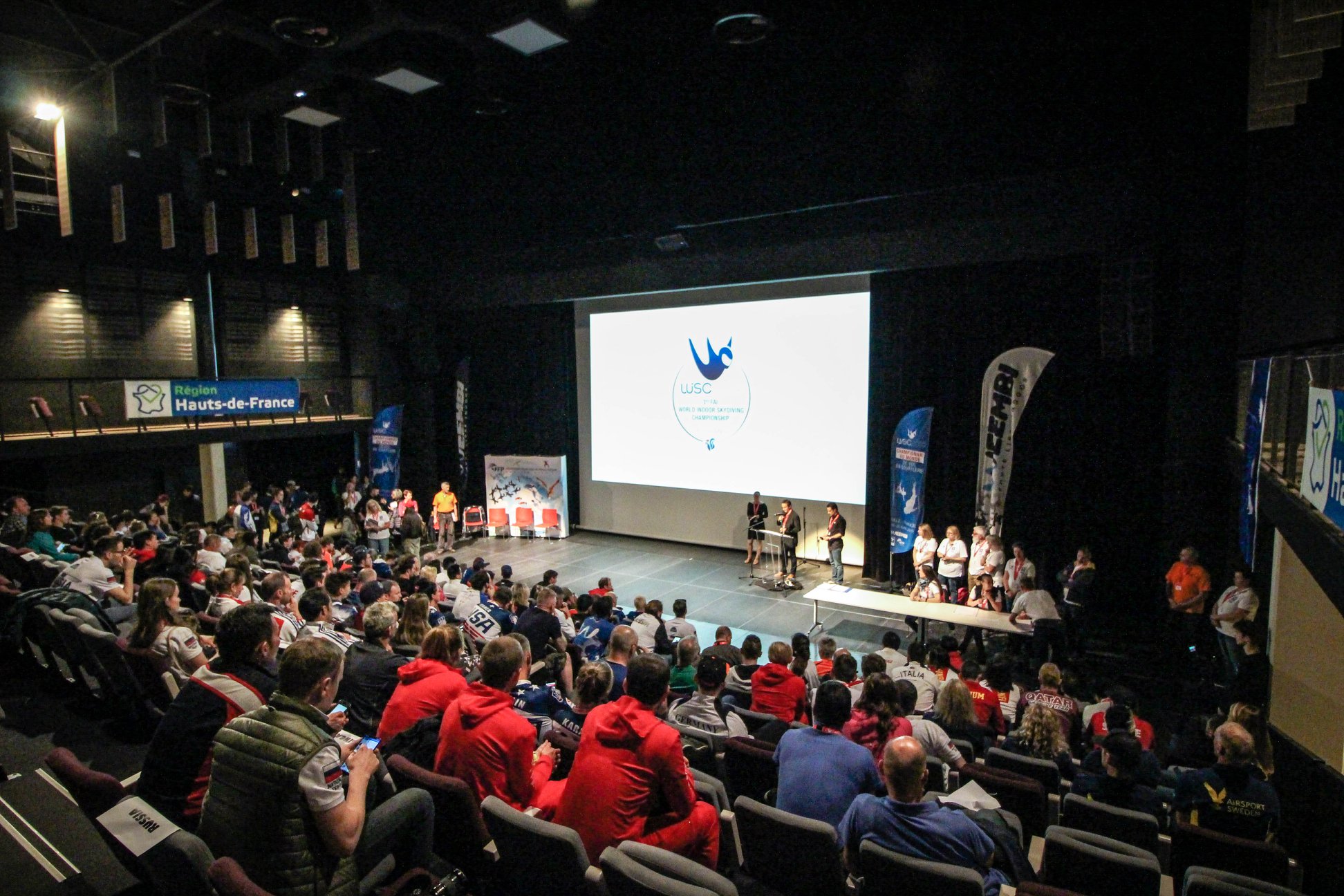 The speeches from the officials; Meet Director of the Championships, Patrice Girardin;  FAI Controller Elisabet Mikaelsson;
President of the IPC Gillian Rayner; Jury President Sarka Blaskova;  David Roth, President of the Federation of Parachuting,  France.
The youngest competitor - Sydney Kennett - represented all the sportsmen here at WISC 2019 and promised to fly safety, play fair and respect the rules and Judges. All the officials wished everyone 'good luck' and have a 'good competition'.

Then we saw the each country's delegations

The Competitors meeting with the judges of the events and the draw closed the Ceremony. 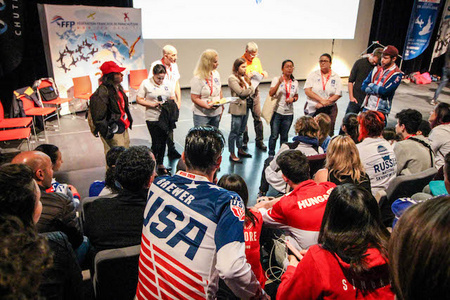 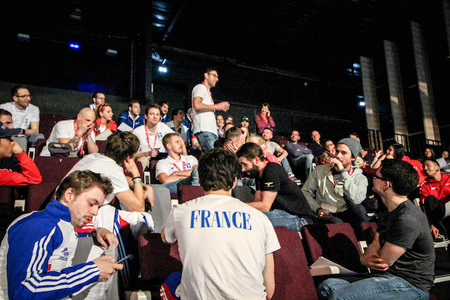 The first competition day of the World Indoor Skydiving Championship in Lille is finished. Competitors flew a number of rounds, but we have two more days so we cannot determine the winners yet as many things can change.

Today one of the team managers said: “The first rule for a competitor is to not hurt himself, the second is to not hurt your team mates. Any other rules are optional”.

The video by FAI about today’s part competition was published on our FaceBook page.
The link to the livestream is – http://www.wisc2019.com/livestream/.Two more reasons for watching are the excellent commentators led by Domitille Kiger - a previous Artistic World Champion, and our President Gillian Rayner. 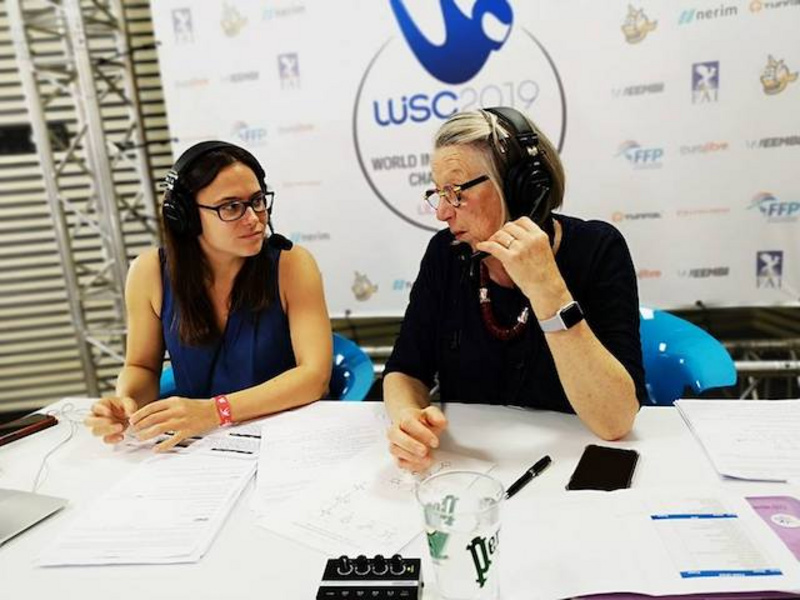 The second day of the competition has finished. We want to start today by giving our thanks.

To the organising committee that prepared everything for this excellent competition; to all their staff and volunteers who remain almost invisible in the background but are doing all the important work. 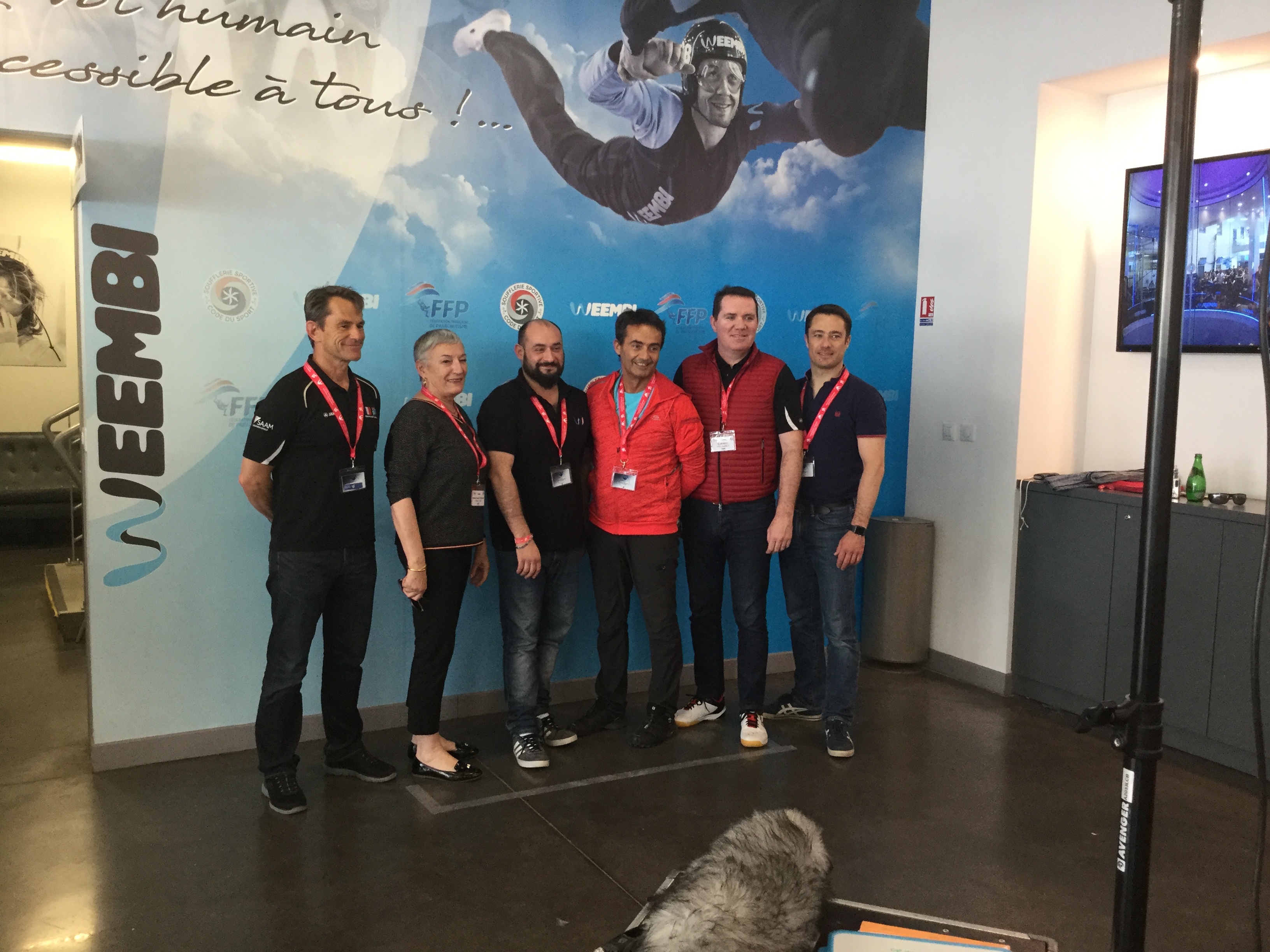 The most important part of any competition is the people who participate in one way or another. These pictures show you the children, men and women, mothers and fathers who have all come here together in Lille to make this competition.

The 2nd day of the World Indoor Skydiving Championship is over. Thanks to all of you, you’ve made this day!

And some useful things.

This is the link for pictures of FAI photographer who is here and capture every nice moment to his camera – https://www.flickr.com/photos/airsports_fai/albums/with/72157706596284431

The third and the last day of the competition closed the 3rd FAI World Indoor Skydiving Championships. It was a really great event that was transmitted on livestream and witty and knowledgeable commentators.

Almost everything went well with very few hitches. The organisers did a great job.

Of course everyone has his or her own opinion – athletes, judges, team managers, spectators and organizers. So we have asked three people who each represent a different side of the event, what they think about the organisation with its good or bad points.

GILLIAN RAYNER – President of the IPC

This championship is a great success. The organization has been really good. The wind tunnel itself was much appreciated by all the flyers, the space inside and the quality of the airflow which apparently was really good. There were a couple of technical hitches but they were quickly sorted out. All in all, the competition was really wonderful!

The competition were really good. I think people were enjoying it. The level of competitors is really high, every year gets higher and higher, so it was interesting to watch. And I enjoyed it as well.

PATRICE GIRARDIN – Head of the organization committee and meet director

I cannot say that it was hard to organize this competition. It’s just a long process with a lot to think about, but it wasn’t too hard. We prepared it with the help of the Weembi wind tunnel, the French Parachute Federation and volunteers so we had a lot of helpers. We were trying to fix everything: the planning system, public web-site, the schedule of the event. So it was rather complicated, but not hard.

Traditionally competitors meeting closed the final day of the competition.

All rounds are finished, all scores are on the web-site. Now we are waiting for the Closing and Awarding Ceremony